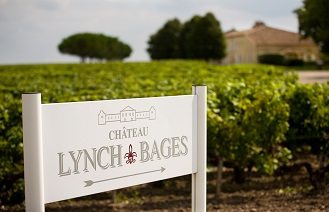 Overlooking the Gironde estuary, Château Lynch-Bages is located on the outskirts of Pauillac, on the plateau de Bages, one of the most beautiful gravelly rises in the appellation. The estate formerly belonged to the Lynch family, originally from Ireland, and was purchased by Jean-Charles Cazes in 1934. His successors, André, Jean-Michel, Sylvie, and Jean-Charles Cazes, have worked tirelessly to develop and promote this well-known château included in the 1855 classification.

Starting in 1980, Jean-Michel Cazes undertook an in-depth modernization of Lynch-Bages, while preserving the former 19th century vat room – as well as the reputation of this outstanding wine. Convinced that wine is part of a certain culture and lifestyle, and a way of being and sharing, he created Château Cordeillan Bages. This Relais & Châteaux hotel-restaurant welcomes guests from around the world and features fine cuisine prepared by chef Jean-Luc Rocha.

In 2001, Jean-Michel handed over management of Lynch-Bages to his son, Jean-Charles, and took on the project of breathing new life into the adjacent Village de Bages.

The wines of Lynch-Bages reflect the family tradition of generosity and excellence. Furthermore, the entire family wishes to welcome you to the estate, so that their wine is something more than just a beautiful label, and to share their passion for Lynch-Bages.