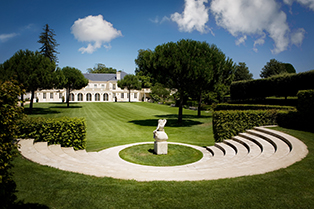 Driven by a taste for adventure and a passion for winegrowing, the Bonnie family have worked at Château Malartic-Lagraviere with tireless energy since 1997…

2017 marks the twentieth anniversary of the family’s management of the property. Since the spectacular metamorphosis carried out by Alfred and Michèle when they arrived in February 1997, Château Malartic-Lagravière has flourished under the management of their children Véronique and Jean-Jacques, accompanied by their respective spouses Bruno and Séverine.

Alongside their teams, the highest level of expertise is applied at every stage of the production process. This intense involvement has become a state of mind, and represents their philosophy. The approach was established very early on, with the use of the best possible techniques in the vineyard and the cellar, so as to be able to do justice to the magnificent gravel terroir! Vintage after vintage, this meticulous care at a fundamental level for two decades is now bearing fruit.

Twenty years. It seems like a lot, and yet so little at the same time… A portion of life within the ongoing story of man’s intimate relationship with the land. A story that can be traced back to the property’s 18th century origins.

So it is that the Bonnie family has greatly contributed to Malartic-Lagravière’s current success. Recognized by leading experts all over the world, its wines have never been more secure in the position they deserve at the highest level.

The Bonnies like to think that their mark will be appreciated by future generations through the wines themselves, that will continue to express the soul of Malartic’s terroir.